In the Art competition named "The Subject of Poet Sezai Karakoç's Life" organized in cooperation with Aydın Provincial Governance and Adnan Menderes University; I was proud to receive an award presented by Aydin Provincial Director of National Education Seyfullah Okumuş. 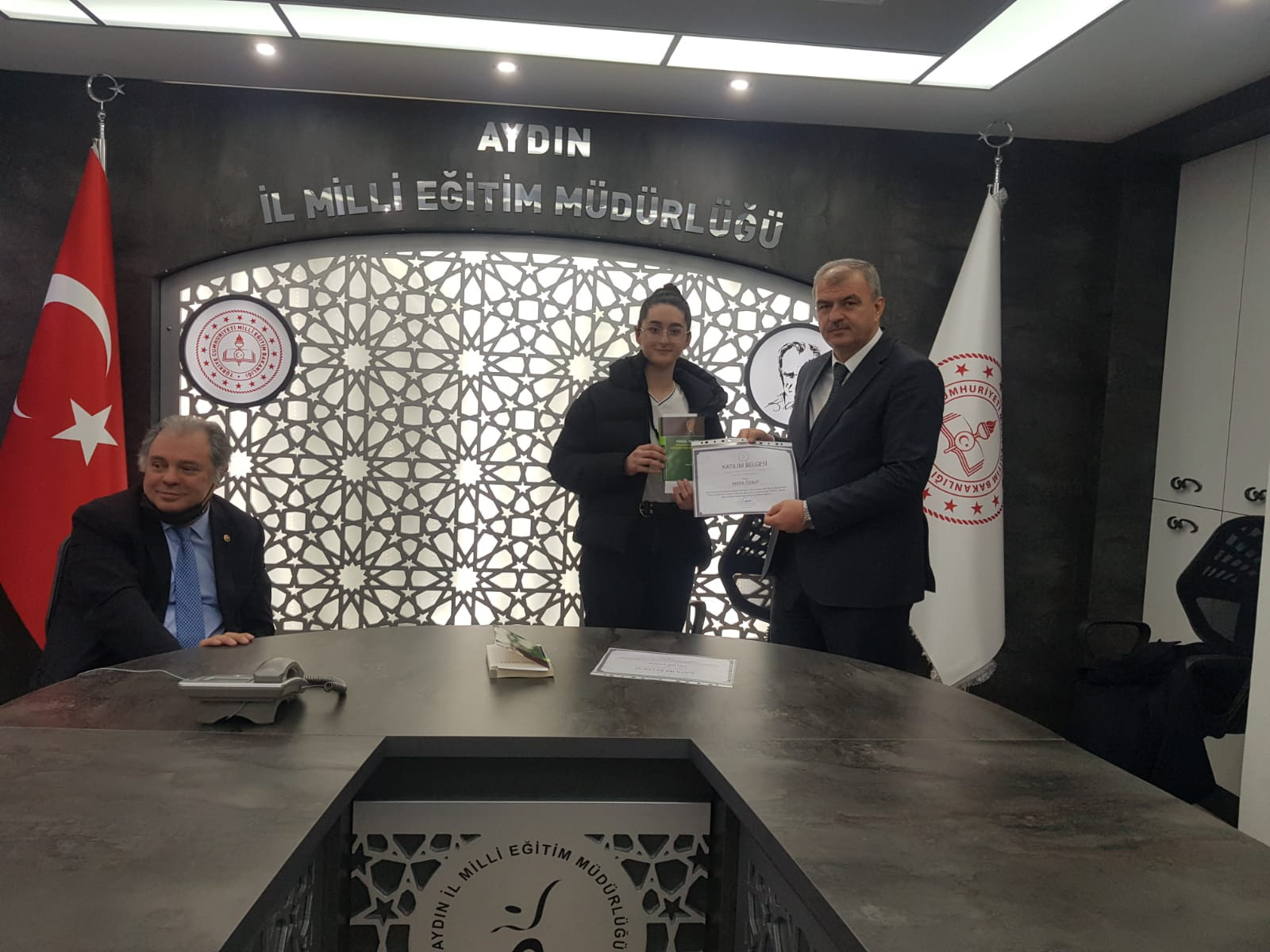 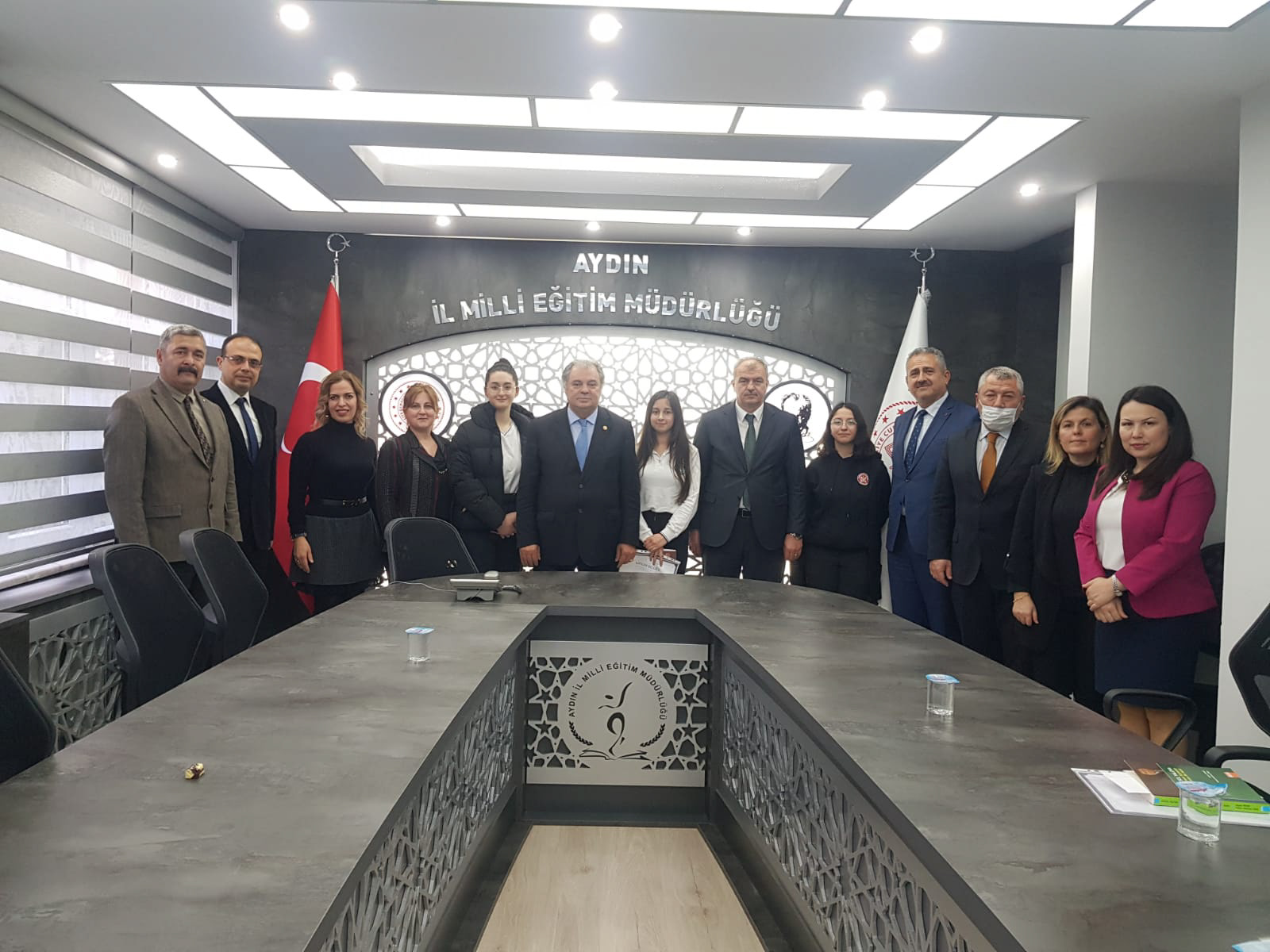 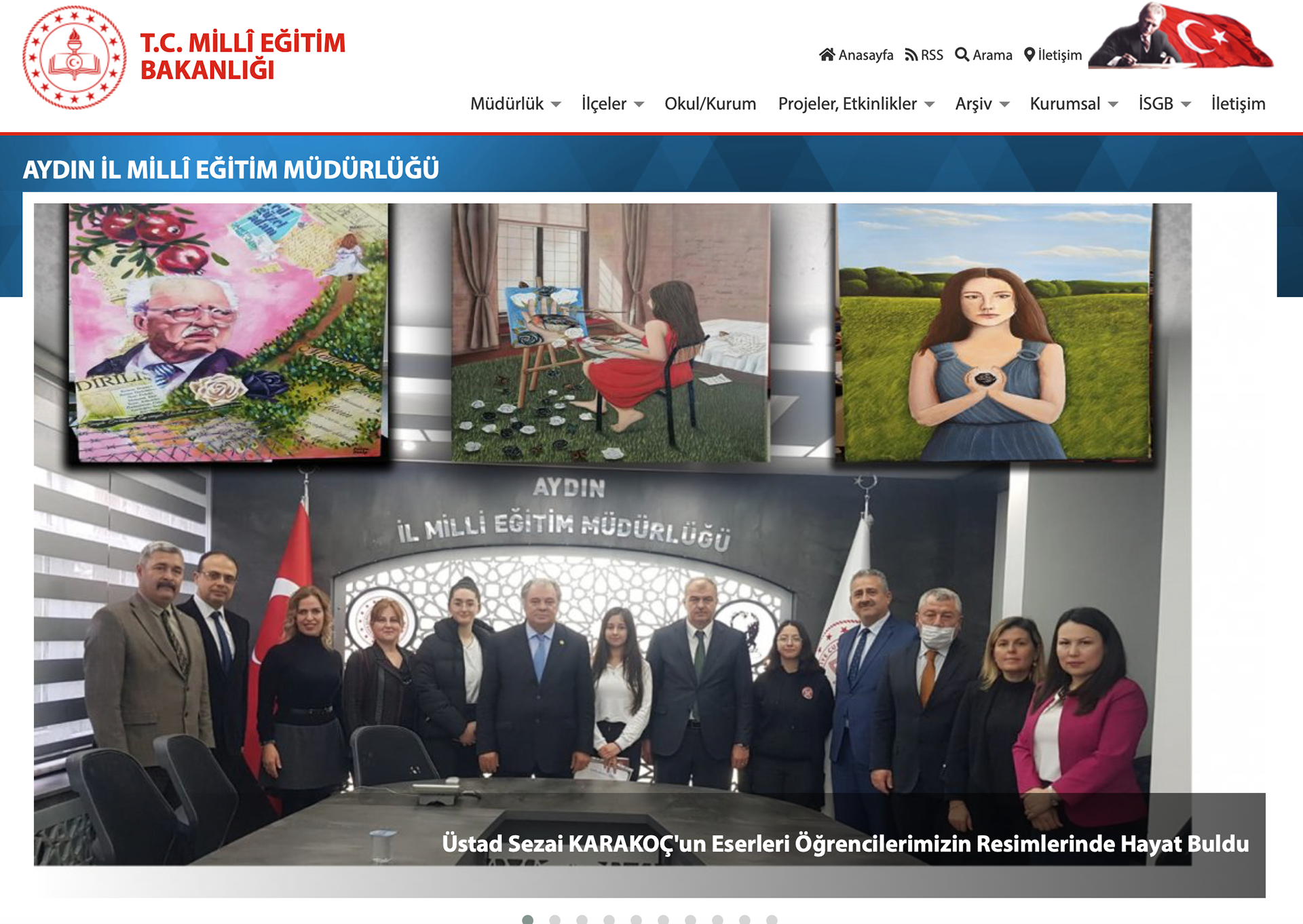 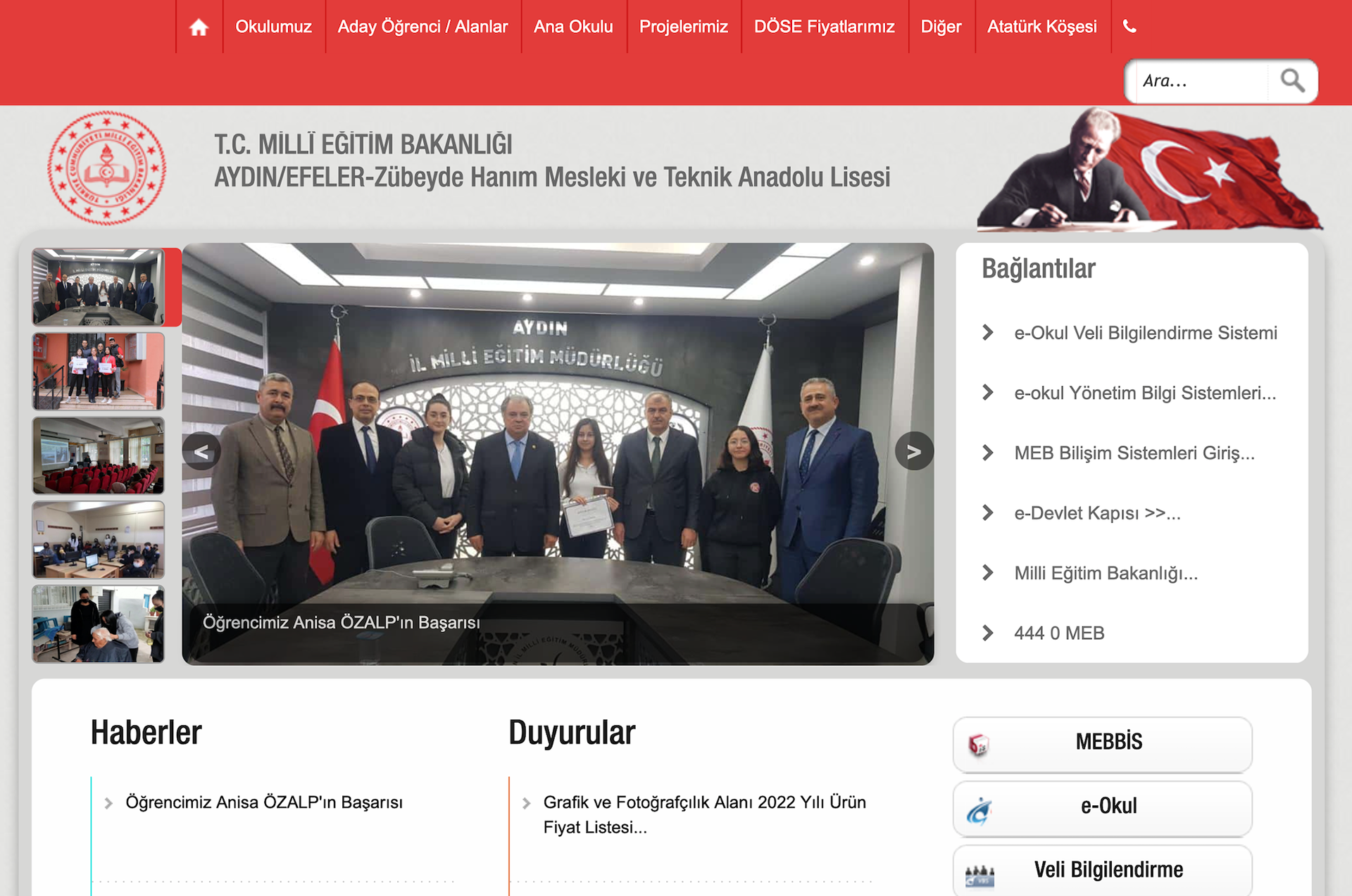 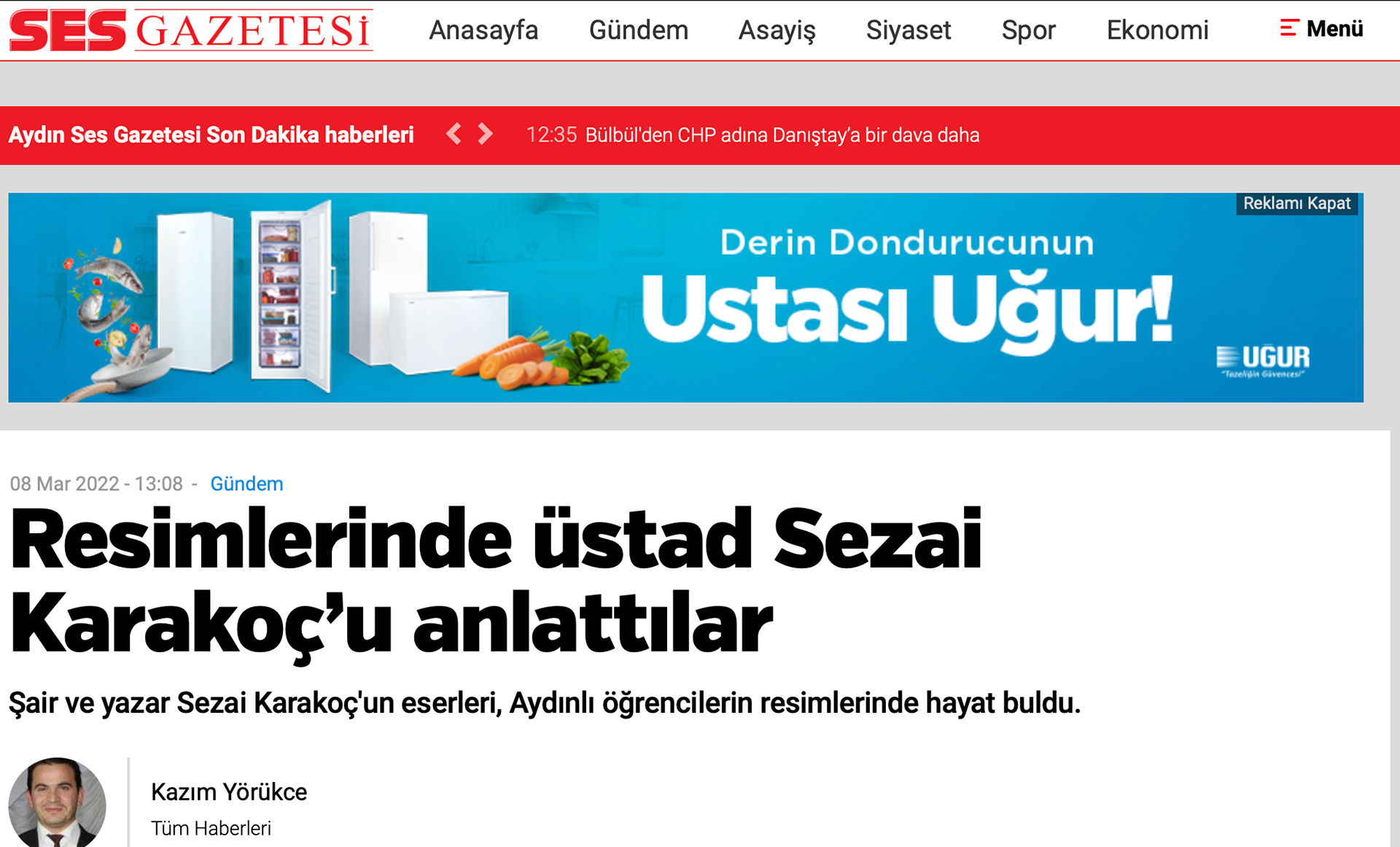 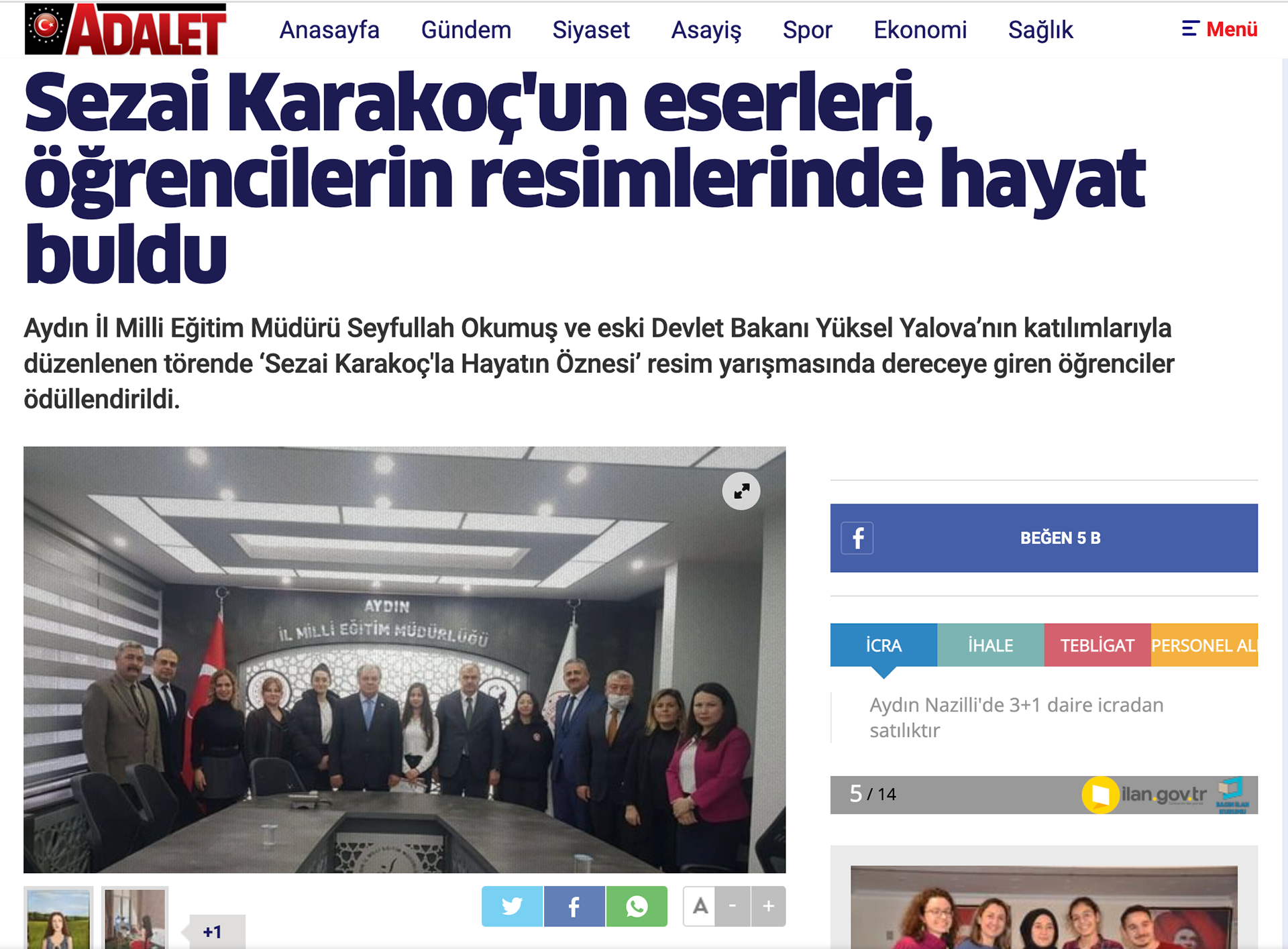 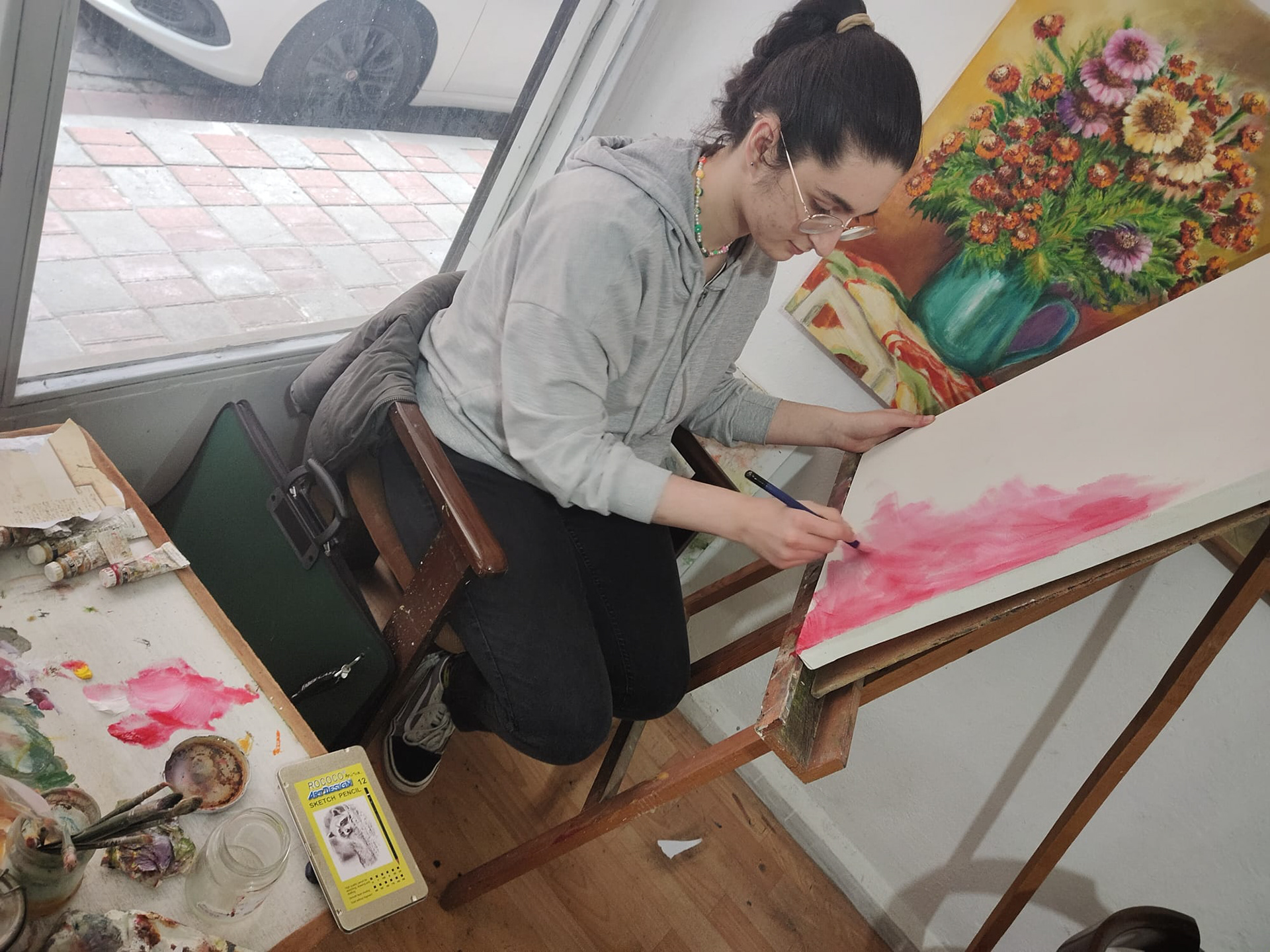 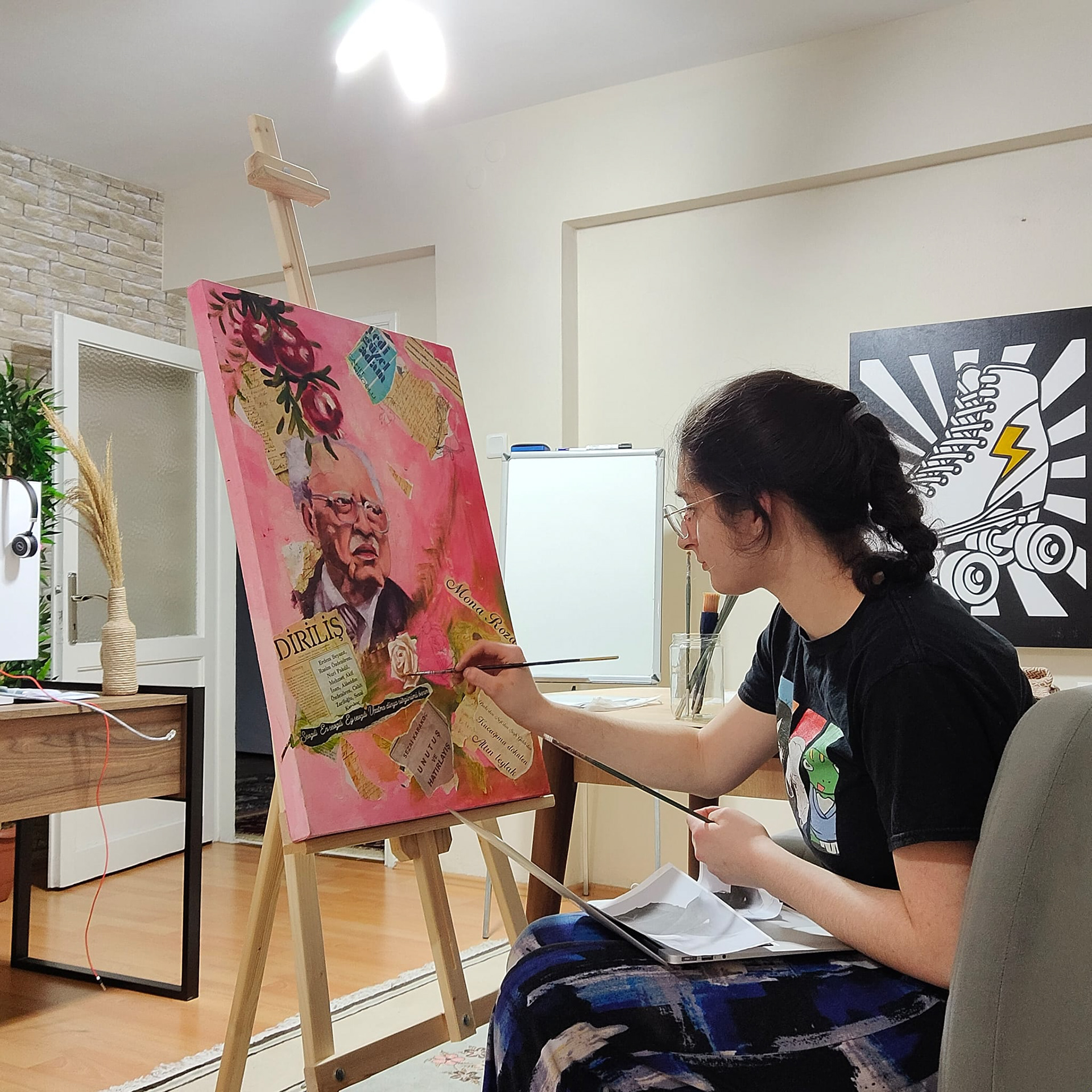 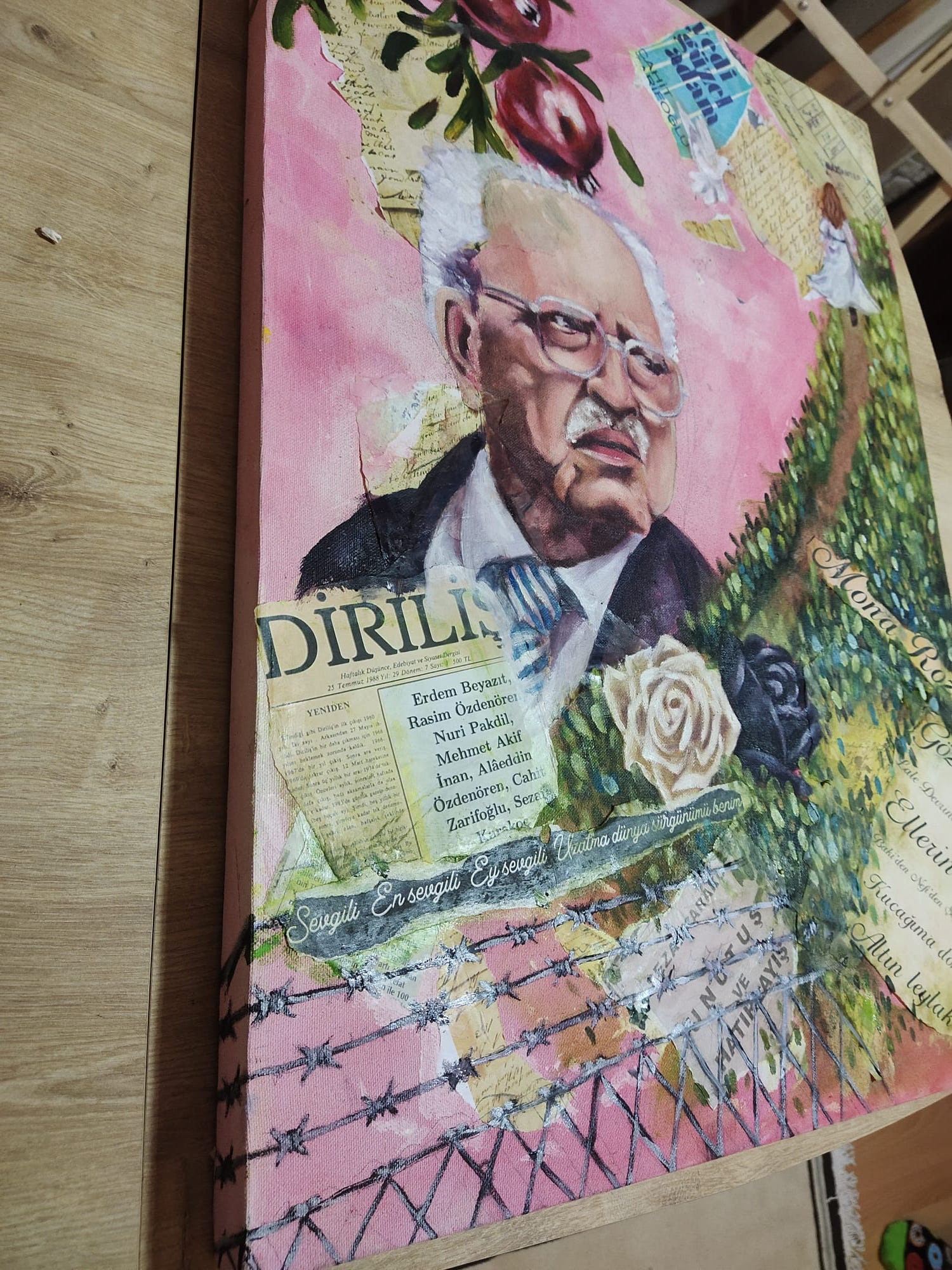 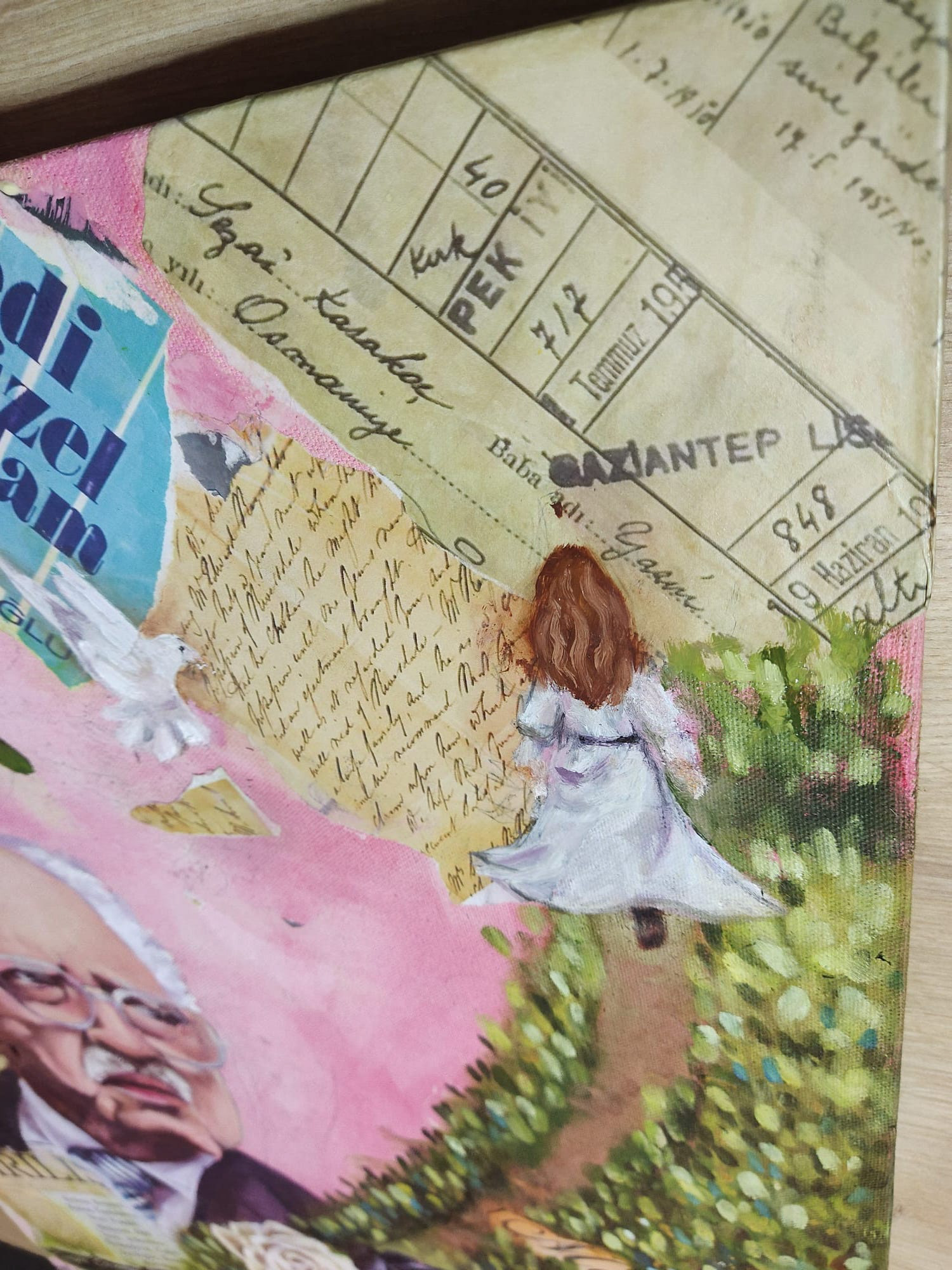 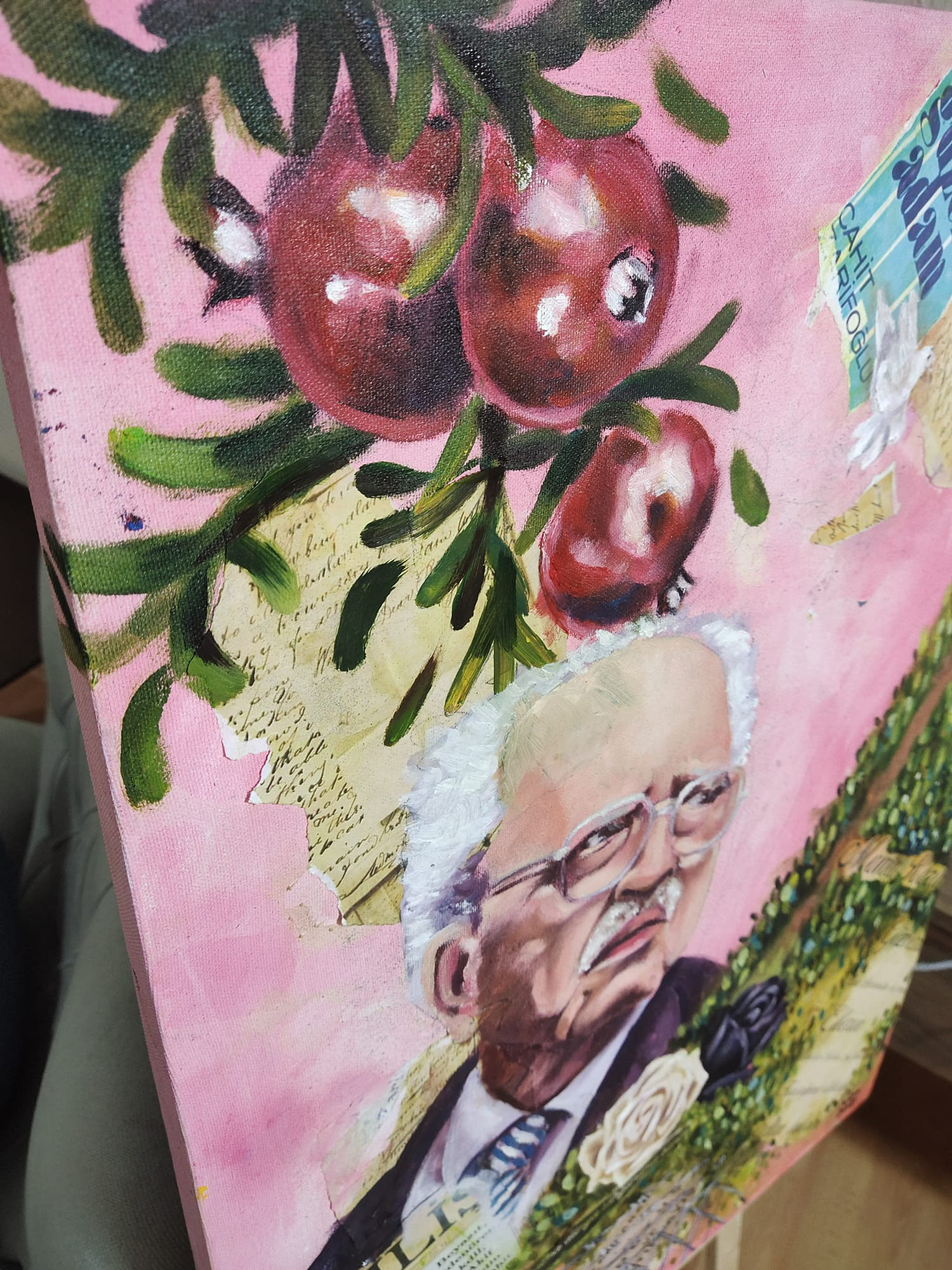 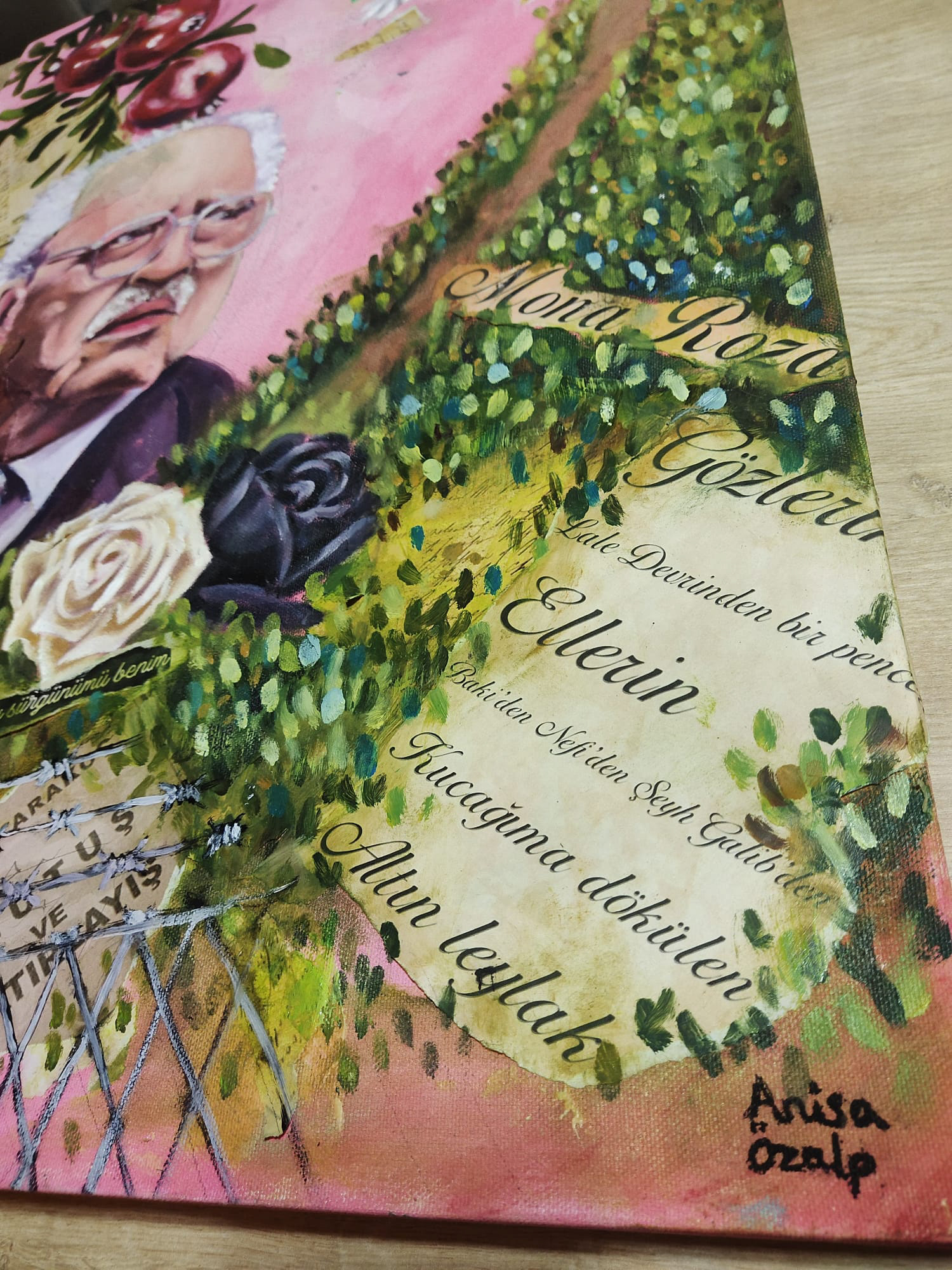 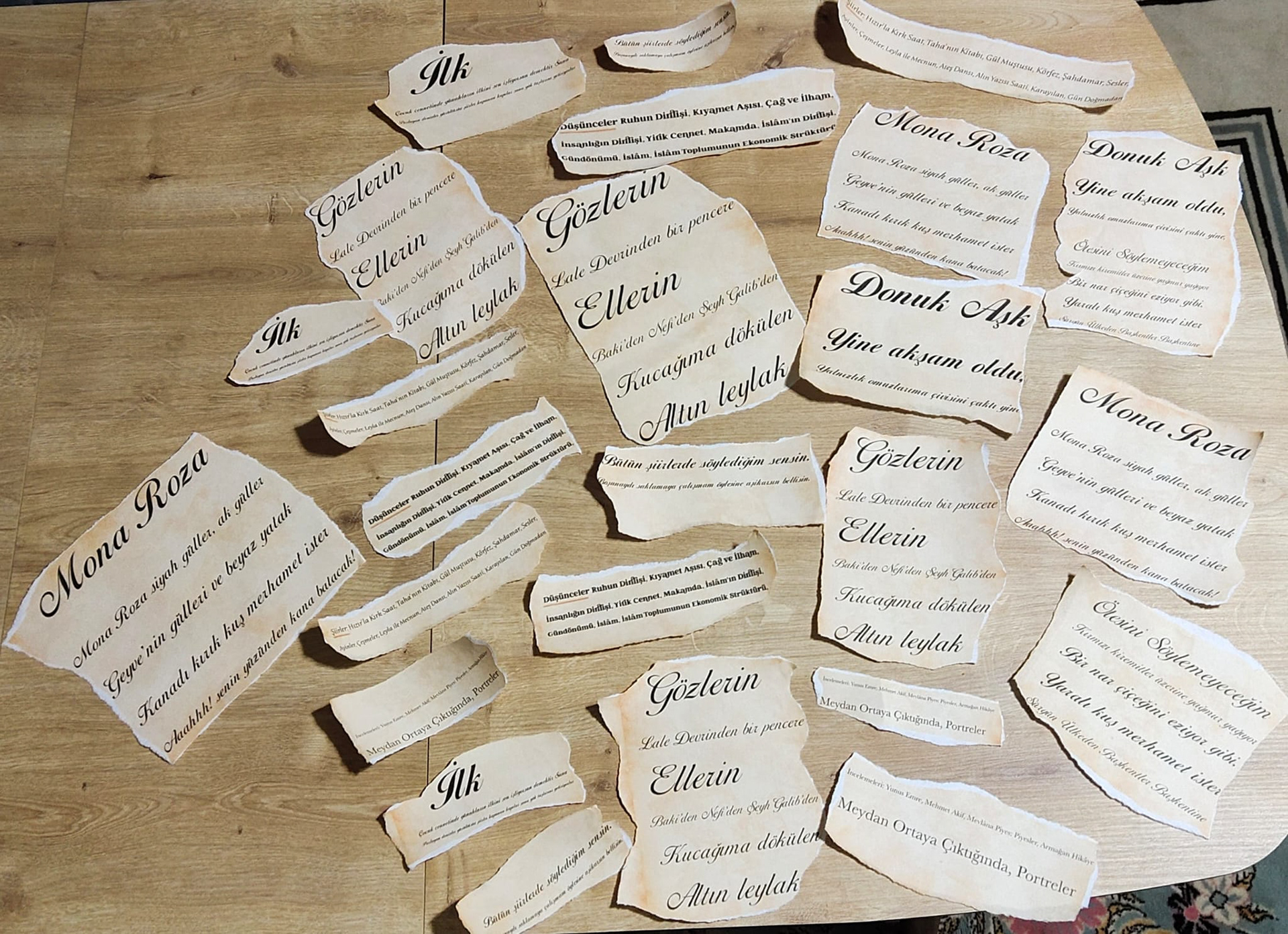 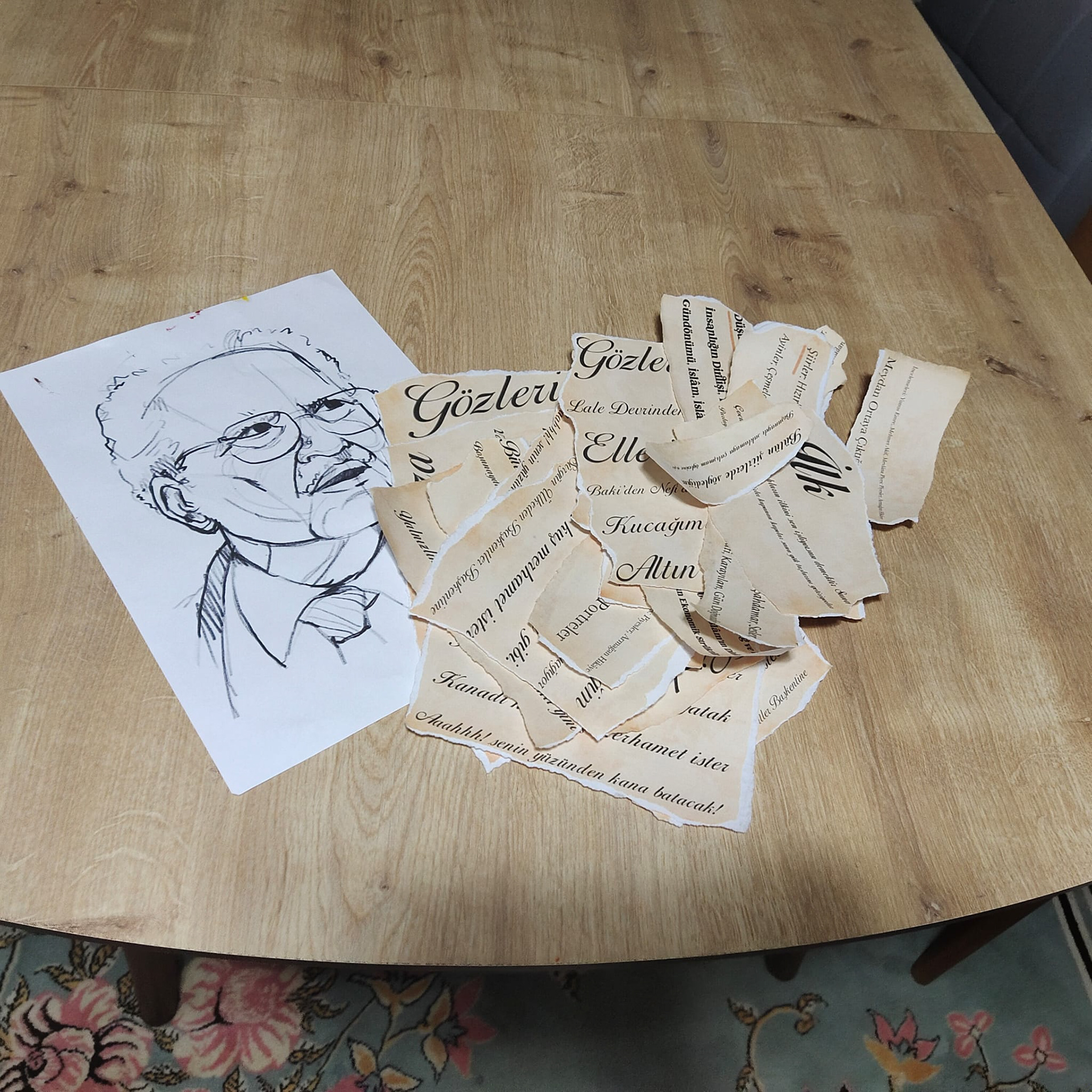 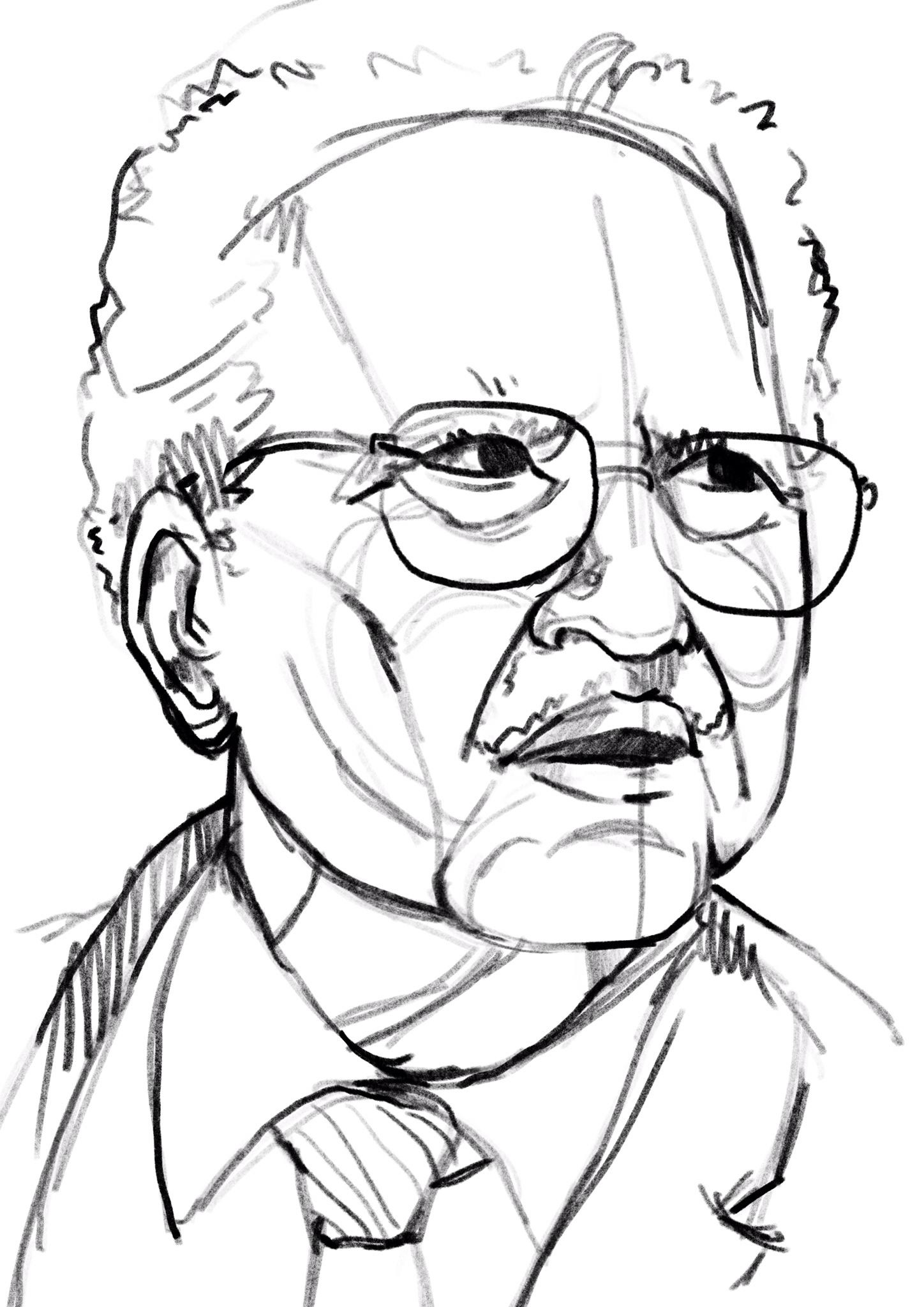 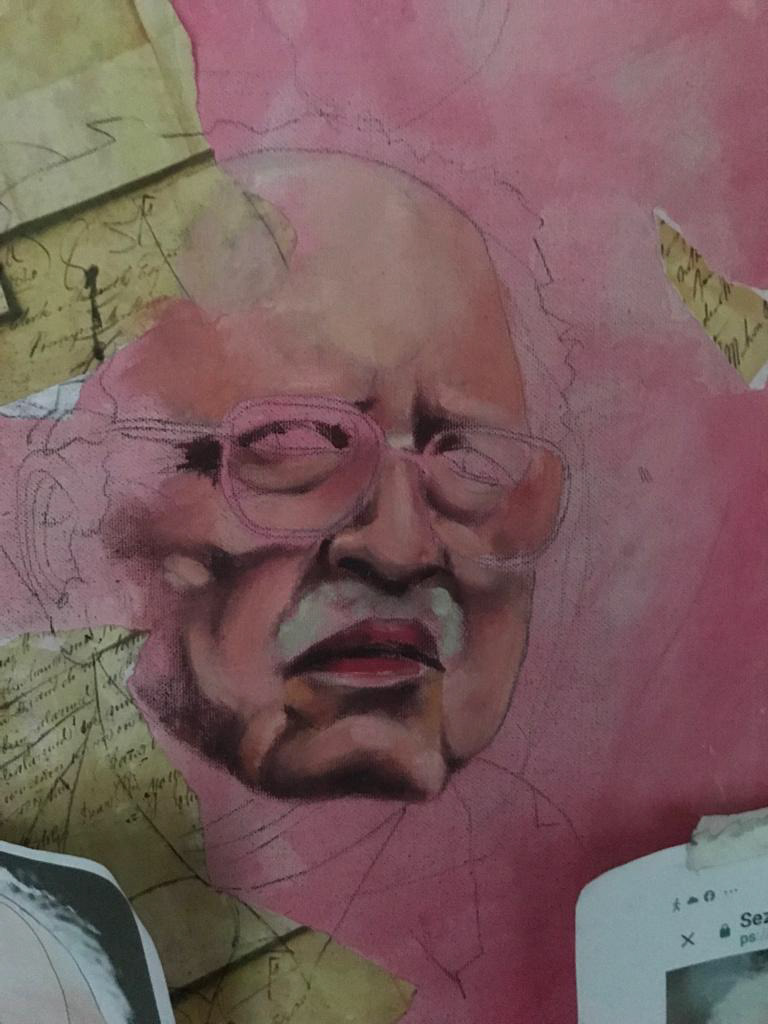 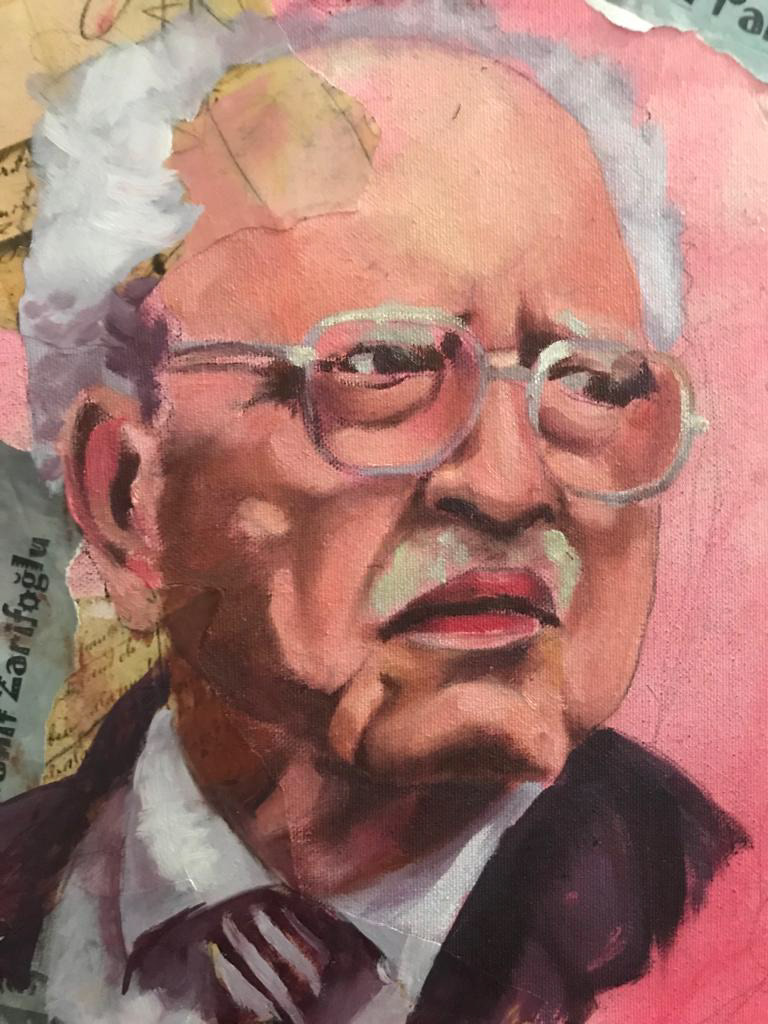 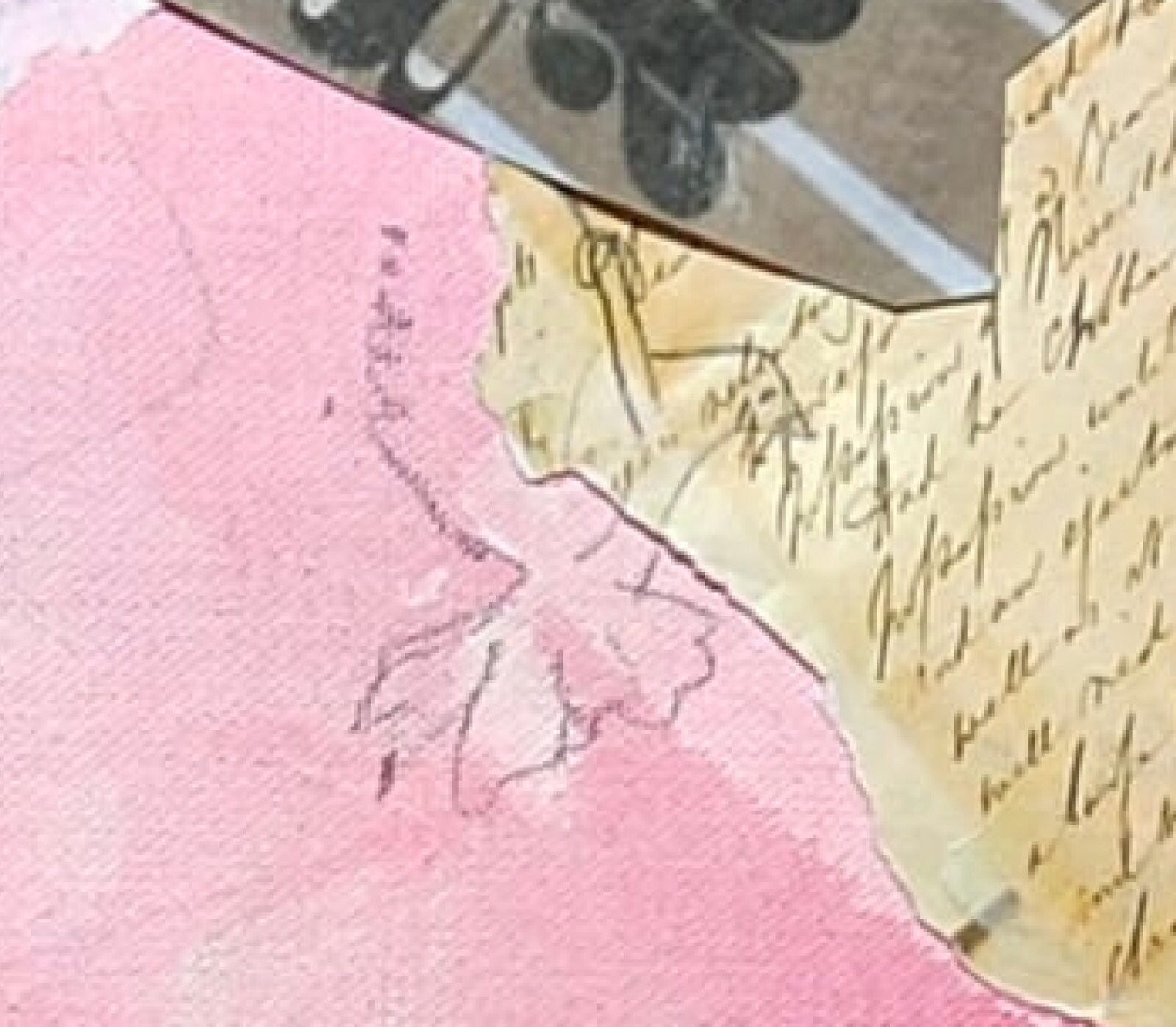 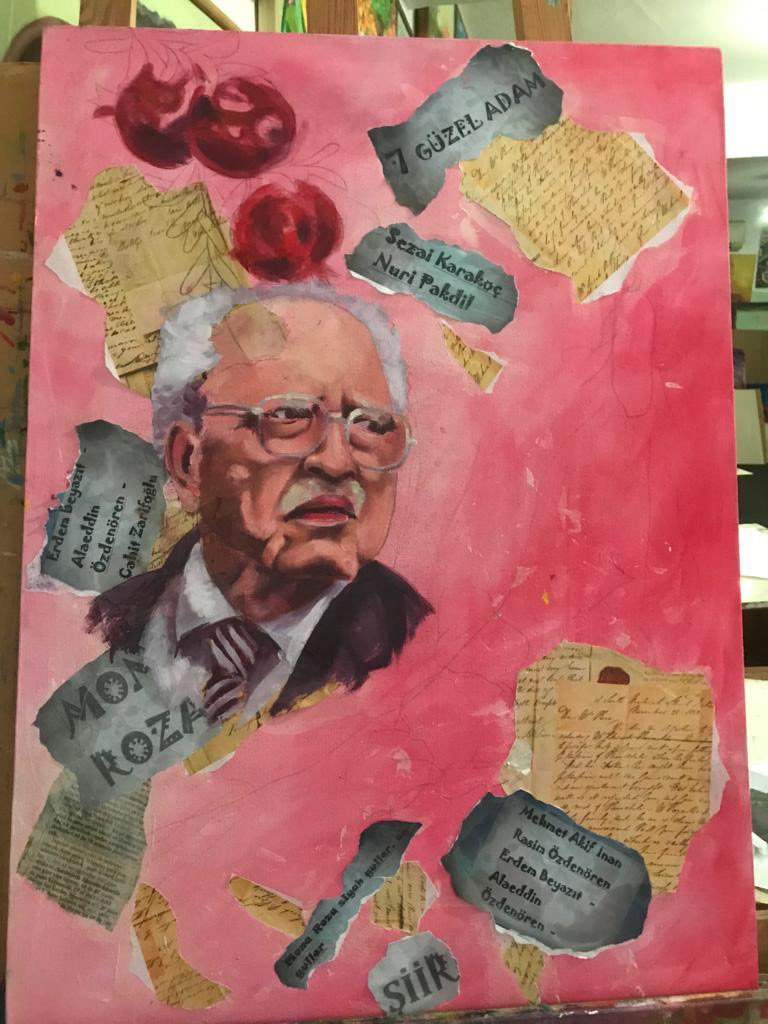 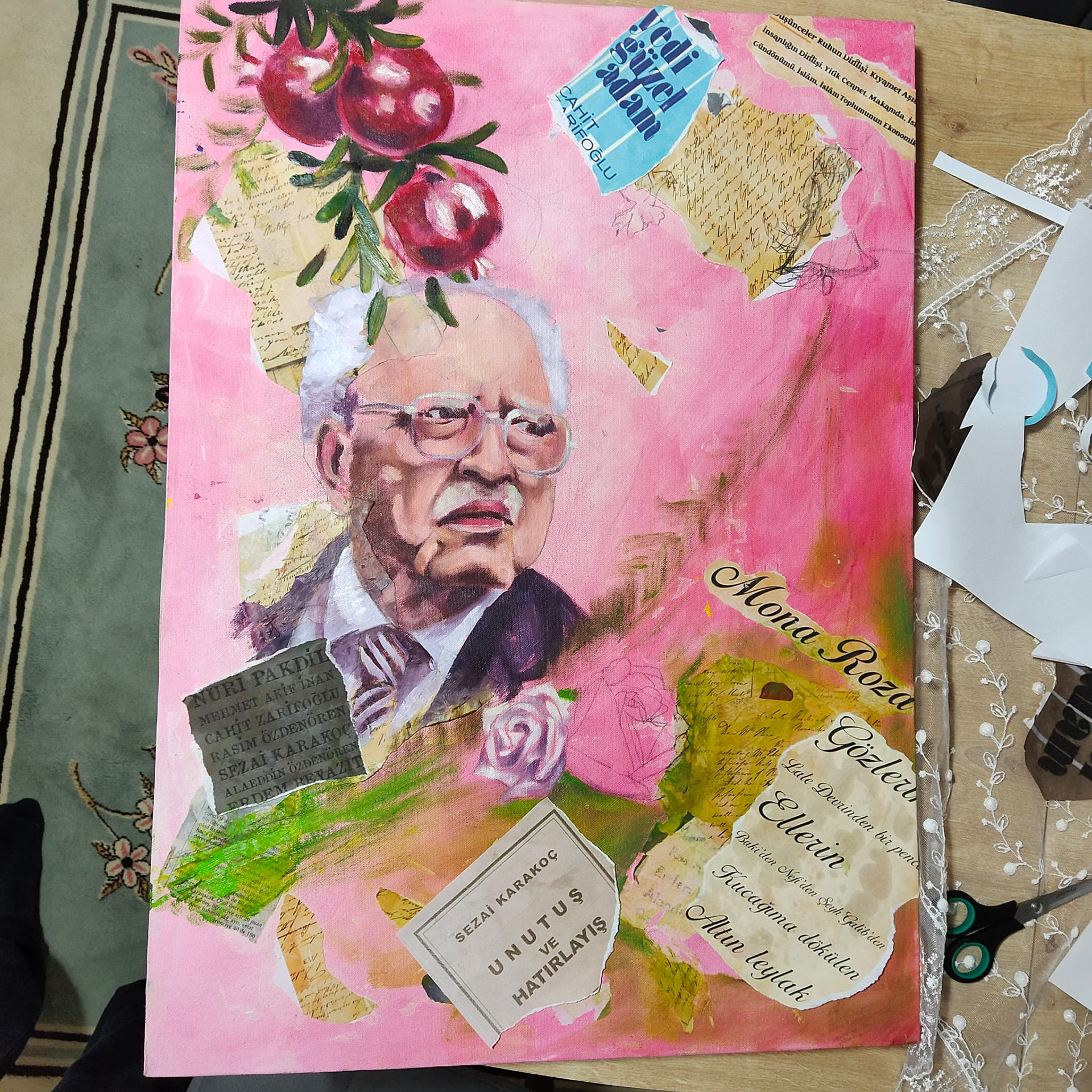 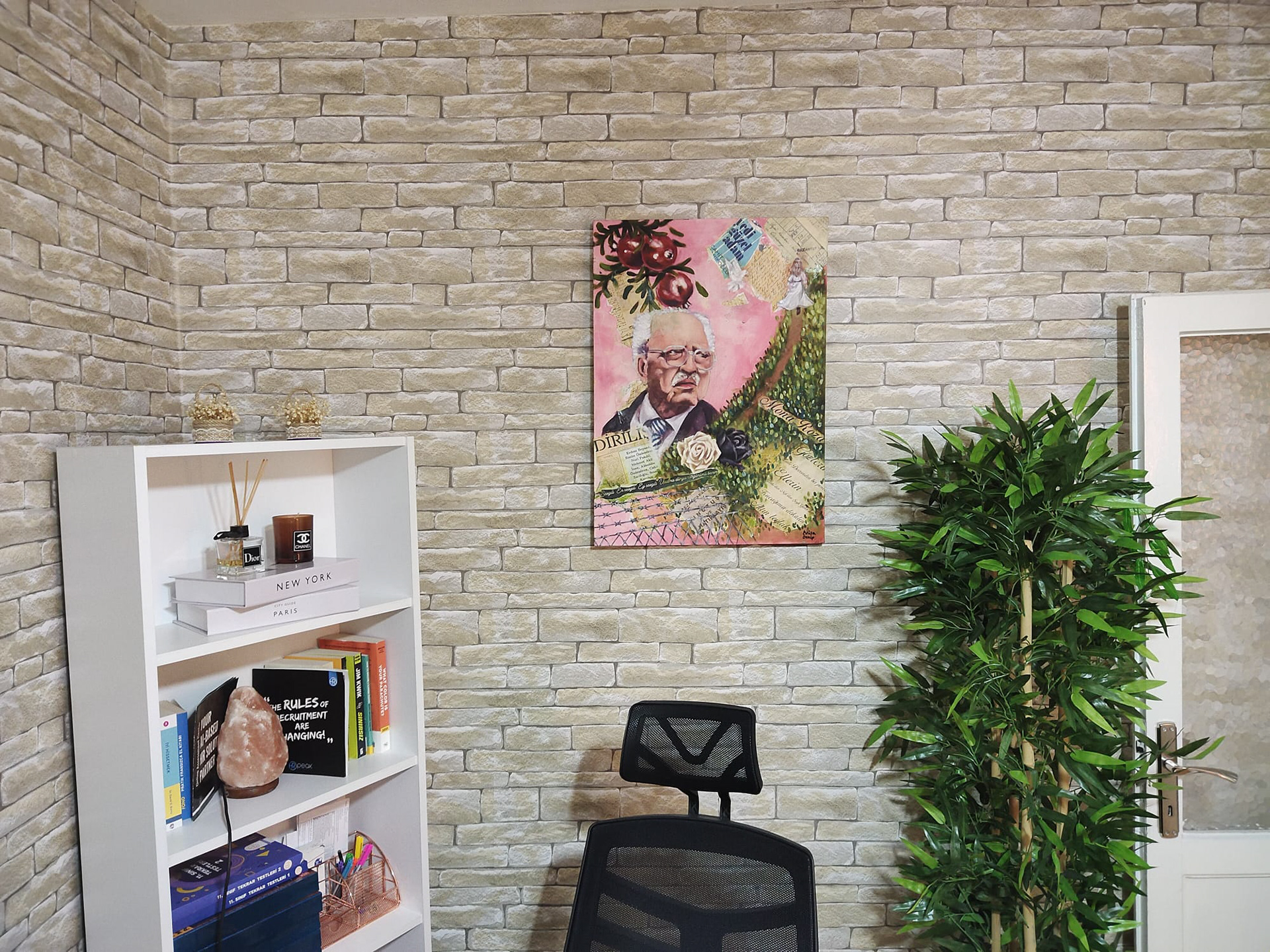 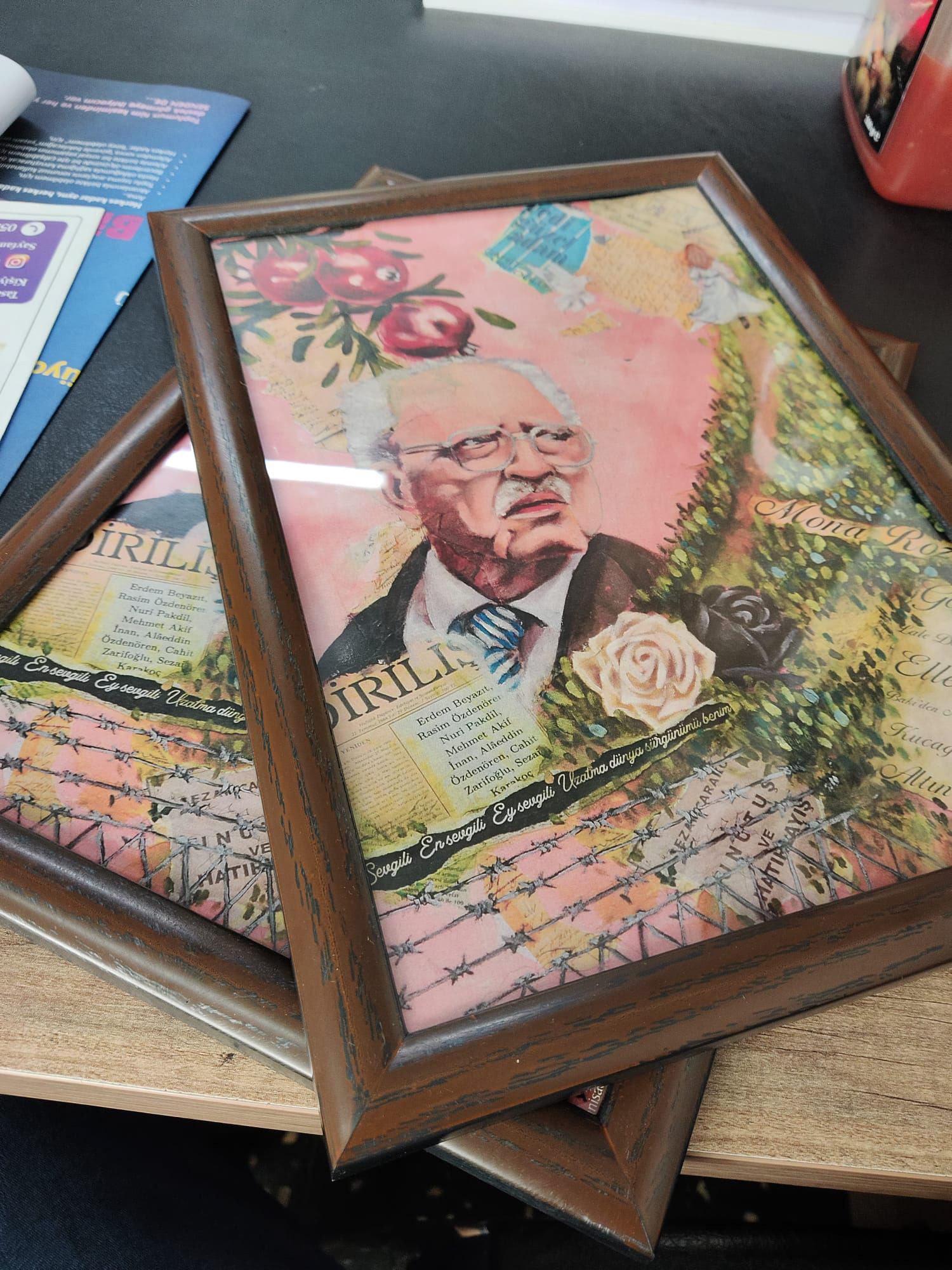 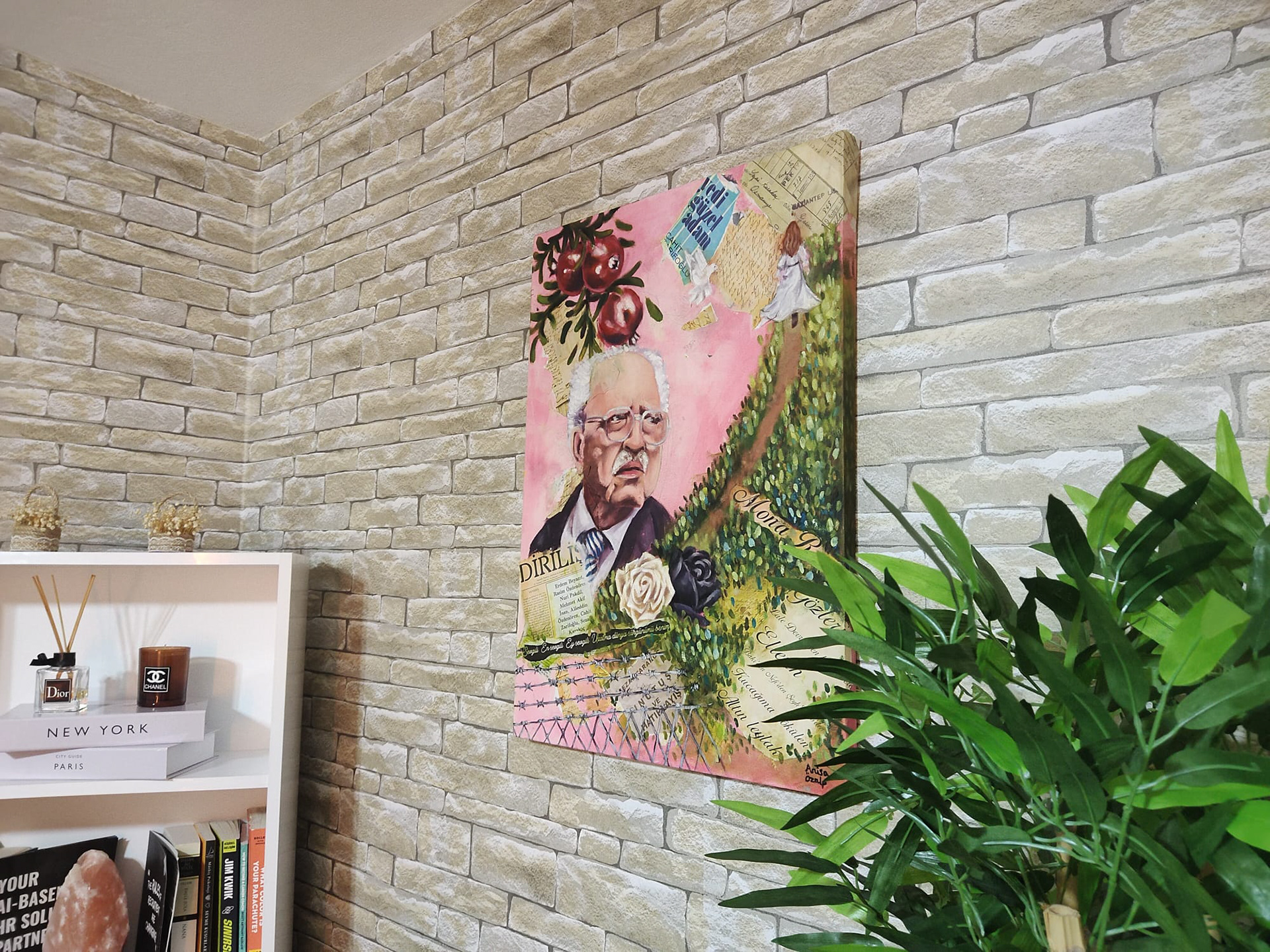 THE MEANING OF THE OBJECTS

Sezai Karakoç spent his childhood in pomegranate orchards; I drew pomegranates to represent his youth. We can also witness the emphasis on pomegranates in his poems.
"Your hands, hands, and fingers Like crushing a pomegranate flower…." From the Poem "Mona Roza"

The yellow handwritten pages in the background of the painting represent the manuscripts of Sezai Karakoç.

The original cover of Cahit Zarifoğlu's book about the Seven Good Men, Sezai Karakoç, was their guide.

Images of original report cards from Poet's school years in Gaziantep. Documents consist of his father's name Yasin and where he lived is Osmaniye.

A flying white bird. It represents the bird in his poems and Poet's spirit departing to eternity.
From the poem "Birds fly just because to imitate your heart," Mona Roza

The greenery and the path represents the course of life.

Again, one of his most known poems, "From the Exiled Country to the Capital City,":
"Your eyes
A window from the Tulip Era
Your hands
From Baki, from Nefi, from Sheikh Galib
Pouring into my lap
Golden Lilac"

Karagül means black rose, which grows only in Şanlıurfa, and the black and white rose is mentioned in the Mona Roza poem.
"Oh, it will fall deep into blood because of you
Mona Roza black roses, white roses."

Sezai Karakoç, who defines this life as an exile, appealed to God to end his separation. The fences of exile and the poem "From the Country of Exile to the Capital City."
"Beloved
Dearest
Oh! My Precious
Don't extend my worldly exile,"  representing his prayers.

Forgetting and Remembering (Unutuş Ve Hatırlayış)- This book consists of articles published in the Weekly Diriliş Magazine meaning Resurrection (with the allies name Mehmet Yasinoğlu) between 1988-1991.

Sezai Karakoç's portrait and The colors of the book's cover "Seven Good Men" were used on his tie.

STATEN ISLAND
Anisa Ozalp was born and raised in New York. Staten Island is one of the places lived and loved by Anisa Ozalp
Richmond County
New York City

MURAL
A mural is any graphic artwork painted or applied directly to a wall, ceiling, or permanent substrate. Mural techniques include fresco, mosaic, graffiti, and marouflage.
Fresco
Mosaic

ANNOUNCEMENTS
You can find Publications, Appreciations, Recognitions, and Announcements regarding Anisa Ozalp's work.
Art News
Announcements
↑Back to Top